Governor Takeshi Onaga carried out his fourth official visit to the United States from March 11th to 14th, 2018 (March 11th to 12th in San Francisco and March 13th to 14th in Washington D.C.).

On March 13th, the Okinawa Prefectural Government held a symposium in Washington D.C. entitled “Changing East Asian Security Dynamics and Okinawa: Re-examining the U.S. Force Posture in Japan,” in collaboration with distinguished American and Japanese policy experts. The symposium was aimed at disseminating information about Okinawa’s current situation, including the U.S. military base issues, and also deepening discussions towards a possible resolution to the Futenma relocation issue by seeking to develop discussions that are free from the fixed idea that Henoko is the only solution.

In addition to the keynote speech by Governor Onaga, the symposium was honored by the presence of the keynote lecturer, the Honorable William J. Perry, former U.S. Secretary of Defense. A panel discussion led by distinguished experts followed, and kicked off a heated discussion in light of the changes in today’s international environment including concerns over North Korea.

Furthermore, Governor Onaga was received by members of both the Senate and House of Representatives, officials from the U.S. State Department and the Defense Department, as well as other intellectuals.

Photos from the symposium in Washington, D.C. 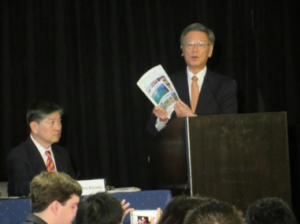 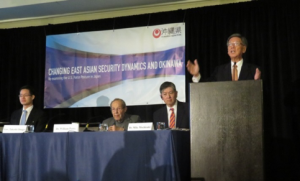