History of the Relocation of Marine Corps Air Station Futenma

United States Marine Corps Air Station Futenma is located right in the middle of a city and surrounded by family homes and schools. It is said to be “the most dangerous base in the world.”

After World War II, the airfield was constructed after land, on which the village municipal office, post office, elementary school and other such community institutions stood, was forcibly expropriated by the U.S. Military when residents were in internment camps. People had their houses and land taken from them and made to live along the fringes of the base. This is how “the most dangerous base in the world” came to be built in the center of a city and is now surrounded by family homes and schools. The people of Okinawa have never offered any of their land to construct a U.S. Military base in Okinawa, including MCAS Futenma.

In December 1996, the governments of Japan and the United States agreed to return the entire area occupied by MCAS Futenma. In May 2006, they went over the heads of the Okinawa Prefectural Government and agreed on a plan to reclaim land off the coast of the Henoko district in Okinawa Prefecture’s Nago City to construct an alternative facility with a V-shaped dual runway. Then, in 2013, an application was submitted to Okinawa Prefectural Government for approval to reclaim the publicly-owned surface water where the proposed base would be situated. Governor Nakaima, who was reelected in 2010 based on his campaign pledge to have any alternative base facility moved outside the Prefecture, approved land reclamation, which presupposes relocation of the facility within Okinawa Prefecture, in 2013.

Governor Onaga pledged in his gubernatorial campaign not to allow construction of a base at Henoko and defeated former governor Nakaima in 2014.
The purpose of the Publicly-owned Surface Water Reclamation Law is to harmonize development and environmental protection, and grants prefectural governors the authority, in cases of land reclamation of public water bodies, to consider an area’s actual circumstances when taking into account the environmental impact on the area in determining whether or not to permit land reclamation.

The previous governor’s land reclamation approval was executed in a manner that failed to address environmental protection concerns in addition to leaving many other questions unanswered. The Okinawa Prefectural Assembly has also raised many questions about the plan, and Okinawa Prefecture residents have continued to express their doubts as well. Therefore, right after his election, Governor Onaga set up an impartial Third-Party Committee to verify whether or not there were any problems with former governor Nakaima’s grant of approval.

In July 2015, the Third-Party Committee reported that there were legal flaws in the reclamation approval as it cannot be said that environmental preservation measures for Henoko have been appropriately adopted.

In October 2015, based on the Third-Party Committee’s report and its review, current Governor Onaga revoked the land reclamation approval on the grounds that previous approval was legally flawed.

Summary of the High Court’s Ruling

Former governor Nakaima’s approval of the reclamation was lawful, therefore current Governor Onaga’s revocation of that approval is unlawful.

Even taking into consideration the will of the people of Okinawa demanding that the U.S. Military bases be consolidated and downsized and taking into account the heavy burden borne by Okinawa compared to that sustained by mainland Japan, it is reasonable to reclaim land from the sea.

With regard to measures for protecting the environment due to the effects of the reclamation work, it is reasonable to conduct a follow-up survey after approval has been obtained from the governor and to flexibly adopt measures based on the advice of experts and other recommendations that are in accord with the conditions present at such time and place.

The High Court’s ruling is unreasonable in that it uncritically accepts the central government’s assertions and indiscriminately finds the previous governor’s approval to be lawful.

After taking into account and carefully examining the results of the Third-Party Committee, current Governor Onaga found flaws in the previous governor’s approval and revoked that approval.

The current Governor’s decision is not unlawful in any way.

Undertaking this land reclamation is not reasonable and infringes on the autonomy of the local government that is recognized under the Japanese Constitution.

To say that the only way to remove damage caused by Marine Corps Air Station Futenma is to reclaim land from the sea and build a new base is not only an illogical leap, but it is also devoid of any logic whatsoever.

74.4% of the area exclusively used by U.S. Forces Japan is located in Okinawa Prefecture, which accounts for only 0.6% of Japan’s total land area. Constructing a new base in Okinawa will further increase this disparity and permanently establish these bases in Okinawa.

In a string of elections including the Okinawa gubernatorial election and national elections, the people of Okinawa Prefecture have demonstrated their popular will in opposition to construction of a new base at Henoko and demanded that Marine Corps Air Station Futenma be relocated outside Okinawa Prefecture.

Land reclamation will directly and irreversibly lead to the loss of the Henoko coastal zone’s precious natural environment.

The Japanese government’s land reclamation project does not give sufficient consideration to the environment.

Over 5,800 species of life, including 262 endangered species, have been identified in the Henoko coastal zone, a precious biological region.

Accepting that it is reasonable to adopt measures “that are in accord with the conditions present at such time and place” as the High Court’s ruling expresses, may end up with measures being adopted after this rare ecological system suffers irreparable and adverse impact. Such reasoning renders the legal system for protecting the environment meaningless.

With regard to measures to protect the environment from land reclamation work, no specific study has ever been conducted even where the study is possible, and many items have been put off until after initiation of reclamation work. Such a process cannot possibly be determined to have been appropriate. As one example, the Japanese government has never disclosed what sort of environmental conservation measures, monitoring system or monitoring investigations it will engage in with respect to the endangered dugong species.

Court proceedings were neither impartial nor equitable.

The legitimacy of Okinawa’s stance is currently being argued before the Supreme Court.

With respect to construction of a new base at Henoko, the Governor of Okinawa Prefecture maintains a variety of powers other than his authority to approve publicly-owned surface water reclamation, which is at issue in the current legal proceedings.

In order for the Japanese government to construct a new base at Henoko, it must carry out a variety of procedures, including filing applications with Okinawa Prefectural Government for approval to change the content of publicly-owned surface water reclamation and an application for permission for crushing reefs, among other authorizations. The governor will re-examine all procedures for which he has authority in accordance with laws and regulations.

If the Japanese government attempts to force construction of the base, then legal battles over these gubernatorial powers will wind their way through the courts endlessly.

What We Want You to Understand

Both the Japanese and U.S. governments say that construction of a new base at Henoko is the only solution to the issue of relocating Marine Corps Air Station Futenma, and the Japanese government is trying to forcibly establish a new base.

However, even if the Japanese government tries to press ahead with the Henoko base construction, completing such a project will be extremely difficult when one considers the endless legal battles, the resolute will of the people of Okinawa demanding that Marine Corps Air Station Futenma be relocated outside the Prefecture, and the ongoing tenacious campaign of prefectural citizens against the base.

The Okinawan people are filled with great sadness and anger as they have been told that Okinawa once again must present an alternate site this time to eliminate the danger posed by the world’s most dangerous base, MCAS Futenma. This situation makes it difficult to effectively operate U.S. Military bases in Okinawa. Thus, it adversely affects international peace and safety in the Far East and poses a very substantial political risk for the United States.

The governments of both the United States and Japan should forgo their obsession that the only solution to the issue of relocating Marine Corps Air Station Futenma is to construct a new base at Henoko. They should listen sincerely to what the people of Okinawa are saying, abandon the current relocation plan (FRF), and work toward an early resolution of this issue. 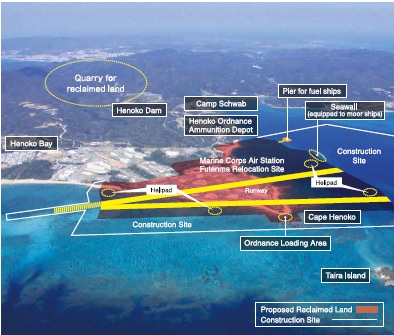 [PDF]The governor of Okinawa revoked the reclamation approval for the new U.S. base at Henoko on Oct 13th,2015.