1 Outline of the visit (schedule and details)

〇 The Governor visited the U.S. to make the reality and issues of bearing the excessive base burdens known, including the issues of Futenma Air Station relocation plan to Henoko such as the construction schedule issue due to the soft seabed, assessment on the environmental impacts, and operational issues as a base.
〇 First the Governor visited San Francisco, and gave a speech at Stanford University. The Governor also met and had discussions with experts such as a former Secretary of Defense the Honorable William J. Perry. At Washington D.C., the Governor met and exchanged opinions with ten congressional representatives, government officials and experts.

The Governor met with the following people (about 30 ~ 60mins / each) and had discussions.

(2) Representatives from the Department of State and Department of Defense
A Ms. Mary Beth Morgan, Office of the Secretary of Defense Indo-Pacific Security Affairs East Asia
B Mr. Ted Saeger, Bureau of East Asian and Pacific Affairs Acting Director for Japan Affairs)

(4) A representative from the Congressional Research Service
Ms. Emma Chanlett-Avery, an analysist

3 Governor’s comments at the meetings

〇 The Okinawa Prefectural Government supports the section (1225) of the Senate bill of the National Defense Authorization Act for Fiscal Year 2020, which requests appropriateness assessment of the projected total cost, support from local communities and training sources regarding the review of the planned distribution/relocation of the U.S. Forces in Okinawa, Guam, Hawaii, Australia, etc.
〇 Regarding the review of planned distribution of the U.S. Forces, we request that the Henoko relocation plan which is strongly opposed by our residents will be included into the scope of the review.
〇 There are various problems regarding the construction at the Henoko new base. And the most problematic is the existence of a soft seabed, which is as soft as mayonnaise and reaches 90 meters below the sea level at the deepest in the reclamation work area.
〇 Further, the fact that the government is trying to build facilities which are less quake-resistant than major airports within Japan is a problem as well. Okinawa prefecture is located in a frequent earthquake occurrence zone. In our prefectural estimation of earthquake damage, we set the seismic intensity at 6-lower on the Japanese earthquake scale. However, the government proceeds the construction with the estimation at 4 or so on the Japanese earthquake scale. If a large scale earthquake occurred after the base began its operation, irreversible damages would be caused and it would have a significant impact on the property of the U.S Marne Corps.
〇 According to our estimate made based on the government materials, it will take more than 13 years to relocate MCAS Futenma.

4 Summary of the speech at Stanford University

〇 The Governor gave a speech at Stanford University on October 14th. The title was “The future of Okinawa – Sustainable growth and managing the U.S. military.”
〇 There were over 50 attendees; researchers and students at Stanford University, and others.
〇 In addition to the base issues in Okinawa, the Governor spoke to the attendees about the importance of dialogue as an approach to solve issues, and to deepen the understanding of each other. The Governor asked, directly, for support by sending letters and emails to local representatives and the government regarding
the Futenma Air Station relocation plan, and to the Government Accountability Office and Department of Defense regarding the prompt and meticulous review.
〇 During the Q&A, the Governor positively informed the reality of Okinawa and political issues he tackles. The Governor’s message was that the people’s power is the most important to protect the dignity of democracy.

〇 The Governor was blessed with opportunities to meet and discuss with many congressional representatives, government representatives and experts, and inform the reality of base issues in Okinawa while the National Defense Authorization Act was being discussed.
〇 Further, the Governor was able to meet and convey the need for cost assessment and meticulous investigation by the GAO and DoD, to the members of congressional committees who are tasked to reconcile the bills from the Senate and House regarding the National Defense Authorization Act.
〇 On the other hand, in order to seek further understanding and cooperation on the U.S. Military base issues in Okinawa, in addition to the Governor’s visit to the U.S., it is important to establish network to continue discussions with the representatives who the Governor had meetings with.
〇 Therefore, we will actively follow up on the matters, and invite the congressional representatives to Okinawa utilizing the OPG Washington Office. 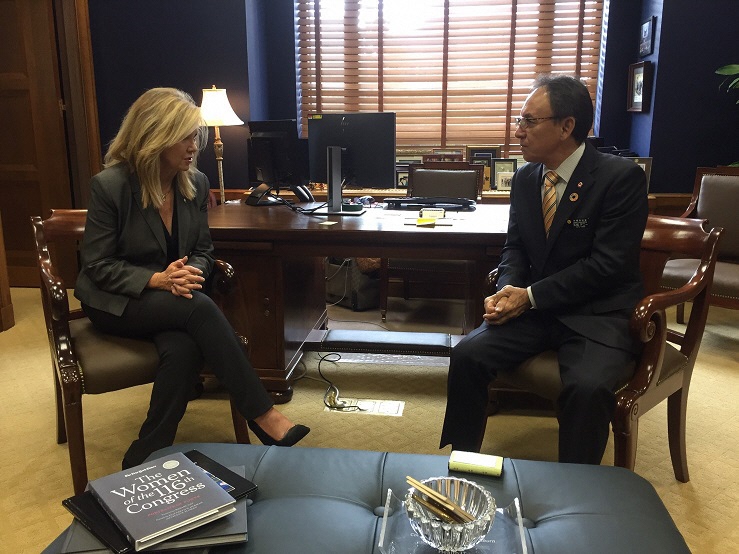 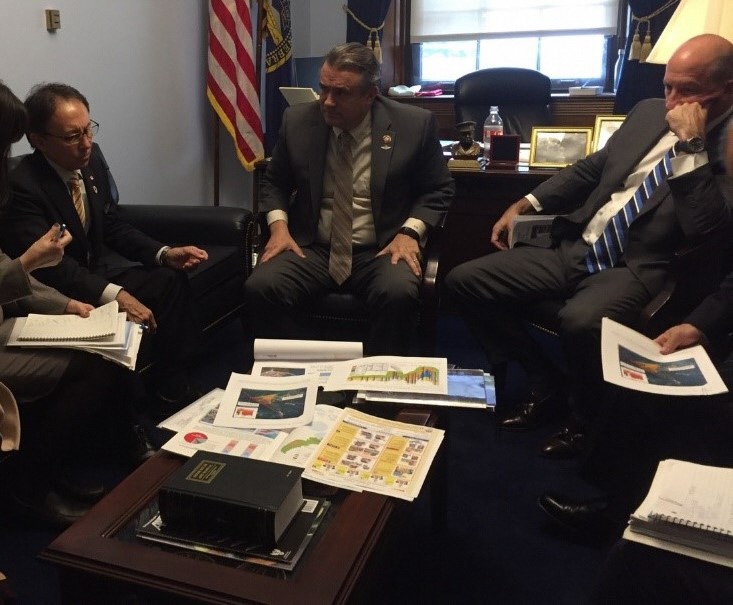 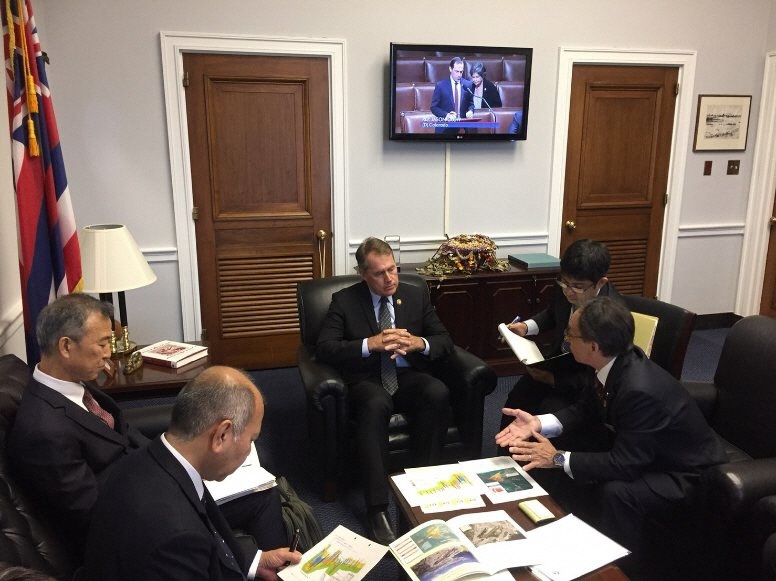 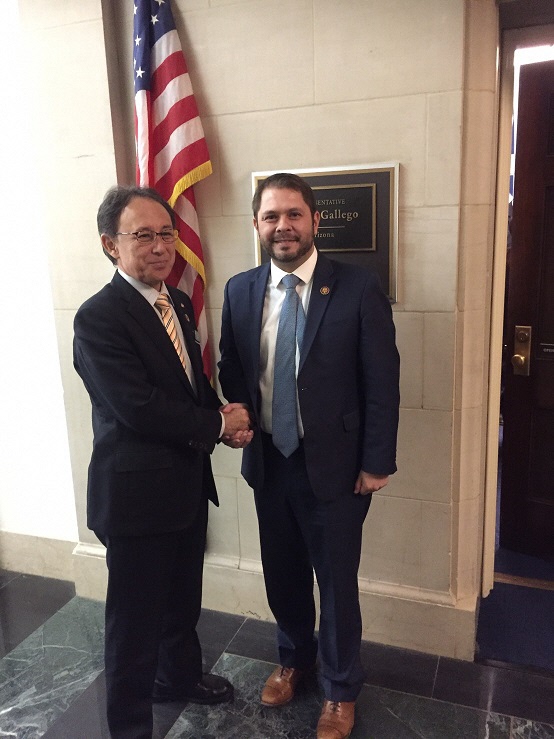 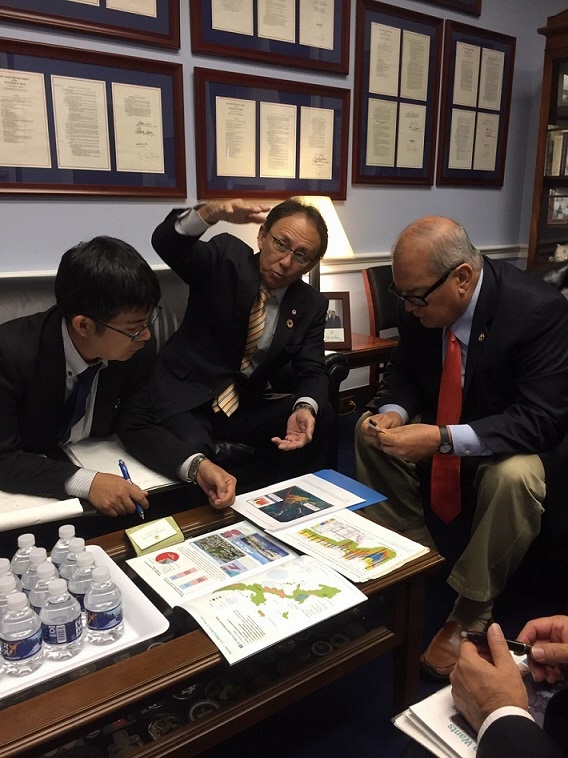